Sunnylea Child Care Centre (the “Centre”) is a privately run non-profit childcare facility, licensed by the Ministry of Education.  The Centre provides day care services for children approximately 18 months to 11 years of age.

Since 1990, the Centre has operated under a volunteer board of directors, and caters to the childcare needs of families whose children are entitled to attend or presently attend Sunnylea Junior School.  Our Centre is located within Sunnylea Junior School and a room at the Royal York Road United Church (RYRUC), located at Glenroy and Royal York.

The Centre offers 4 programs: Toddler, PreSchool, Kindergarten and School Age.  The details are as follows:

Each year, the Waiting List for 11 year old children is closed and a new Waiting List is opened for births in the current year.

New Waiting Lists for births in the current year will be opened on the first business day in October of the current Birth Year (e.g. the Waiting List for children born in 2015 opened Thursday, October 1st, 2015).  The Centre accepts Waiting List registrations for unborn children, which helps to ensure that children born (or adopted) near the end of a given Birth Year have the same opportunity for enrollment as those born at the beginning of the Year.

In order to register a child for the Waiting List for the current birth year, parents may call the Centre at 416-233-6509 beginning at 7:30am on the first business day in October. The Centre will not accept any calls prior to 7:30am or any walk in registration that morning. You will be asked to provide your name, telephone number, your child’s name and birth date.  Children will be registered on the Waiting List in the priority in which their call is received on that date.  Each family will receive a call later in the day to complete a questionnaire for registration on the Waiting List and have the opportunity to ask any questions.

To register a child on a Waiting List for any other birth year, please call the Centre during regular business hours on any other day.

In order to secure a spot on a Waiting List, the potential client must live within the Sunnylea Junior School catchment area.  The catchment is the area bounded by Bloor Street West on the north, Prince Edward Drive South on the east, Berry Road on the south, and Mimico Creek and Royal York Road on the west.

To meet the needs of client families, the Sunnylea community, and Centre operations, vacancies are filled first in the Toddler Room, next in the Pre-School room and then upward in age group with vacancies in the Sr. School Aged Room filled last.  For individual vacancies, selection priority has been established as follows:

The Centre will use reasonable efforts to enroll siblings in the same location for the Jr. and Sr. School Age programs (ie. both in the Satellite Room or both at the School) but cannot guarantee any particular location.

The Centre may move children between locations to better balance gender and age distribution.  Requests for children to be moved from one location to another will not be accommodated except in furtherance of a balanced program.

Frequently Asked Questions
Sunnylea receives a number of questions regarding its Waiting List Policy.  Some of the most common questions are answered below.

Are Waiting Lists capped?
Waiting Lists are no longer capped and can be of any length.  The Centre will accept Waiting List registration requests for all eligible children.

Is there a fee to register my child on a Waiting List?

There is no fee to maintain your spot on the Waiting List.  A $50 administration fee is levied at the time of enrolment.

How many openings are there within the Centre in a year?

There are approximately five openings in the Toddler Room each year. Availability in the other Rooms depends on child withdrawals and child progression within the Centre.  There are typically few withdrawals in any given year; consequently the number of vacancies is usually low.

When a spot in the Toddler Room becomes available, it will be offered to the child who is highest in priority to be admitted, according to the Prioritization guidelines listed above. If that child is not yet old enough to start attending or the parent(s)/guardian(s) wishes to delay their child’s commencement, for a reasonable period of time, the spot can be held for that child if the parent(s)/guardian(s) start paying the monthly fees as of the start date for the available spot, as advised by the Director of the Centre.

If the parent(s)/ guardian(s) elect not to pay the monthly fee to guarantee the spot, the vacancy will be offered to the child next in priority.

What happens if I decline a spot in the Centre when it is offered to me?

If you decline a spot in the Centre, you will be put at the bottom of that Waiting List.

Once I have registered my child on a Waiting List, is there any advantage to making further inquiries about availability for my child?

If it is beneficial to monitor your child’s position on the Waiting List for his or her Birth Year, you are welcome to call the Centre from time to time.  Please note that the Centre receives a large volume of calls related to its Waiting Lists so it may take several days to receive a response.

Once on a Waiting List, is there any guarantee that my child will be enrolled in the Centre within a reasonable period of time?

Unfortunately, no.  Withdrawals from the Centre are low and there are very few vacancies in a typical year.  In addition, child progression through the Centre varies as the composition of the Rooms changes somewhat from year to year.  Consequently, the Centre cannot guarantee your child will be admitted within any time-frame.

A family moved into the neighbourhood recently and their child was just enrolled in the Sunnylea Child Care Centre.  I know my child was registered on a Waiting List before theirs. Why was their child selected before mine?

I was told I was first on the Waiting List for my child’s Birth Year yet when a vacancy opened up for that Birth Year it was offered to someone else.  How can this happen?

I registered my child on the appropriate Waiting List for the Sunnylea Child Care Centre, but have since made alternative day care arrangements.  Will my child’s name be removed from the Waiting List?

No. Your child’s name will remain on the Waiting List for his or her Birth Year, until:

Further, your child’s position on the Waiting List will not change as a result of your making alternative day care arrangements (it may change for other reasons as outlined herein however).  As long as your child remains on our Waiting List, you will receive a call each and every time a suitable vacancy becomes available and you are in priority to fill the vacancy.

What is the Sunnylea catchment area?

The Sunnylea catchment is the area bounded by Bloor Street West on the north, Prince Edward Drive South on the east, Berry Road on the south, and Mimico Creek and Royal York Road on the west. 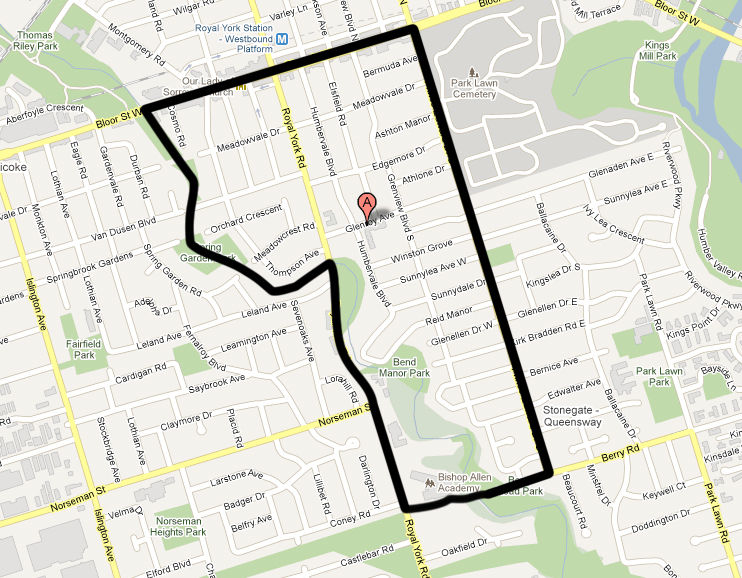 What happens if a client family moves outside of the Sunnylea catchment area?

Since you no longer live within the Sunnylea Junior School catchment area, you are no longer eligible to attend the Centre and you must inform the Centre of this when you receive the offer.  Children who do not live in the catchment area will not be enrolled in the Centre.